I was extremely excited to read that after the Spielberg / Cruise twaddle and the failed attempt to get a movie version of Jeff Wayne’s musical made, that the BBC themselves have made a true to Wells novel Victorian set War of the Worlds.

I first came across this news last summer, but it is only recently that I saw an early trailer for the series, featuring a very brief image of a fighting machine looming over Shepperton church – I think!

I think it is fair to say that myself, and a fair few other folk, were rather disappointed in this design. Indeed, it actually resembles one of the alien Masters from a previous BBC adaptation, that of John Christopher’s “The Tripods”, well known for boring people to death in the 1980s.

Many readers  perhaps think of “War of the Worlds” as being a rather steampunk novel, what with all its descriptions of “boilers on stilts” which will be another potential source of disappointment in the new design. Indeed Wayne himself saw the Steampunk in the source material when he heavily steampunked the set and costumes for the Liam Neeson version of the stage show; guyliner and goggles, cogs and corsets ahoy for the cast and band!

But the Martians weren’t actually a steampunk fantasy, they represent an attempt to describe the utterly unworldly in a language of Victorian design and industry, one of boilers and funnels and the huffing and hooting of ships and trains.

Hence we shouldn’t be disappointed when our fighting machines look like what they are; space vehicles millenia ahead of the technology of Wells’ or indeed our own times. And if we want designs closer to our aesthetic sensibilities, look at Alvim Correa’s beautifully atmospheric illustrations done at the time for an illustrated version of the novel.

And also hope that the new BBC adaptation does what no other adaptation has ever done; depict a truly terrifying martian itself.

In pencil and neon, my favourite lunar cryptid creation…

Our hooting friend has not been forgotten

It was long ago reported in this journal of the extent to which exposure to the venom of a certain species of wasp caused people with the correct cerebral receptors to be able to internally warp time and space to find themselves drawn to the centre of the galaxy.

It had long been assumed that the galaxy concerned was the Milky Way, the barred spiral we call our home, but it is not. It is far further away than even the unimaginable distances to our own galactic centre.

The galaxy concerned is The Wasp Galaxy, where wasps are formed and transported to earth via portals into and out of the 11th Dimension.

This explains the human race memory that wasps have no evolutionary place on Earth. They are right. They are not from here. They are formed from giant galactic clouds of dust and gas and are in fact light years long. Strange relativistic effects and the dreams of higher dimensional creatures make them smaller in our universe. In other universes, they are the size of clusters of galaxies.

It is said the nature of people who can envisage the wasp galaxy through their venom is evil. This may not be true. They may just be different.

When a wasp stings you, you are being stung by a galaxy entire.

The Newark Steampunks were joined by a few of our colourful colleagues from Lincoln, who gave a few lessons in parasol duelling to Tony and the rest of us!

It is so good to see a strong turn out at our meetings in The Flying Circus, even a latecomer like me who introduced my visiting sister to the group, who was much taken with Mr Frisby’s tales of tuneable bones.

So, some pictures of our colourful brigade of governors and detectives. 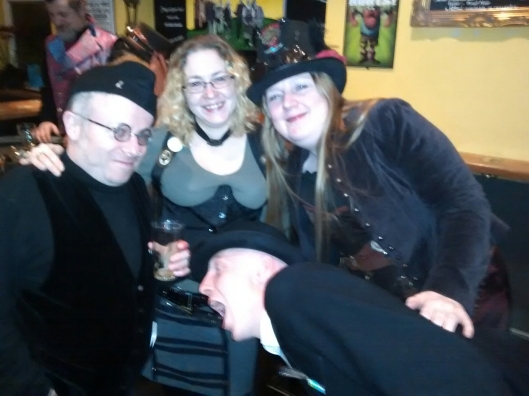 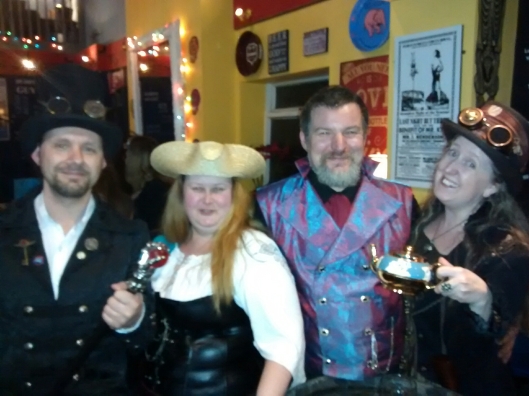 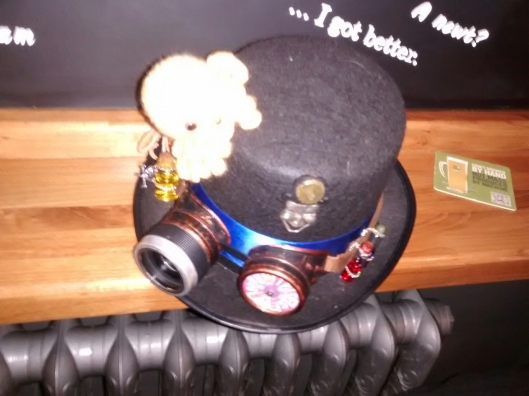 Moon-a-mucks are not real, but I wish they were and so does everyone who ever read about them.

I created them a long time ago, I think when I was studying a course on moons; our own Moon of course played a prominent part, geology thereof, vulcanism, impact crater formation, the Tycho rays stretching across the surface, glittering vitrified beads making the moon glow.

As interesting as it all was, I wanted there to be something alive up there, something making the moon more than just lava and dust. So I conceived the idea of the moon-a-muck, a creature that hoovered up crystals of quartz and assorted spars, and in return for this lunar nourishment it was able to sing, through a vacuum at that, to the moonflowers that deposited them as a sort of seed, and thus make them grow through a sort of quantum resonance process.

Then there was Lord Moth, who was the lord of all moon-a-mucks. He sent them across warps in space time to earth, and there the moon-a-mucks sang in dreams to people, for the gain of I know not what.

The joy of it, perhaps.

Then I realised this was all rather remote, and decided to team up a single moon-a-muck with Aristophanes Brown, my late Victorian sort of detective, inventor and theatre critic bon viveur and his companions Lady Alexia Laplace, and Carina, walker of moon-a-mucks. And in my London of then, they work together solving improbable crimes and doing improbable things.

Be honest. You’d all worry if I got one of my little meeting reports out even vaguely on time, after all I have a life of writing about small birds and attempting to run the wildly fluctuating weight off my hide to live. As well as drinking sugarless tea with a side serving of packets of biscuits.

I know, my life is a massive set of counter intuitive paradoxes.

Well, you want to see the pictures and I have sugarless, joyless tea to drink before I go to my bed. 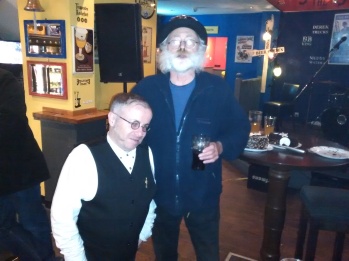 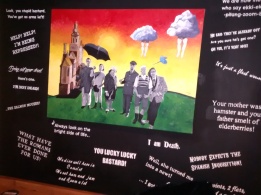 “You know”, said Aristophanes Brown, walking arm in arm with Alexia Laplace along a quiet stretch of the Thames near Richmond, “this is had been the most appalling summer for bees I can remember. No wonder the flowers have been dismal.

The moon-a-muck, trailing behind Carina on a lead, in its doggy disguise, hooted to itself. It felt that songs, not bees, ought to be the key to a successful summer bloom.

Alexia admired the winter waterfowl out on the river, then looked up to take in the graceful sight of a swan in flight, no doubt searching for inspiration for her design and gadgetry.

“This is true Ari, although I’ve never figured you for a botanist. It’s been a year short of colour anywhere where our moon-a-muck hasn’t sung its song.”

The moon-a-muck skipped along, delighted to hear its name in conversation.

“Well, at least we won’t get stung” Aristophanes opined.

“That is small consolation for world starvation when all the crops fail, Ari.”

“Surely too. Without these pollinating insects, we are, to be frank, bloody well doomed.”

Alexia adjusted her flaming hair, and lit a cigarette.

“Do we know what’s behind it?”

“No, I don’t. But if we don’t find out, then no matter how much our mucky sings, we are going to be eating each other in a few years.”

They walked on in silence.

Not so many miles to the North West, under the grounds of a family country estate just outside of Oxford, a man releases a thousand bees from an enclosure in an underground chamber where there buzzing echoes with apocalyptic feedback from the concrete walls. Then another thousand. And a thousand more. And he wades through the swarm, happily allowing himself to be stung as his mind homes in on the centre of the galaxy.

I was a latecomer to the monthly meeting of Newark’s Steampunk group last night; well, we do meet rather early and at my advanced age I worry about my ability to last the pace.

I understand that it was another excellent get together at The Flying Circus, with more newcomers meeting up with us, and other folk visiting from the Lincoln group. Topics of conversation; well the return of Jay after hospital was one, and obviously there was plenty being said before I got there.

The conversation I remember concerned film cock ups, started by myself and Steven remembering a beach bound piece to camera on Countryfile where the footprints in the sand indicated where the presenter had done three previous takes, and ending where we mentioned how Maximus’ farm in Gladiator is covered in tractor tracks.

Are you not entertained!!! 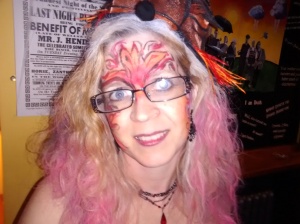 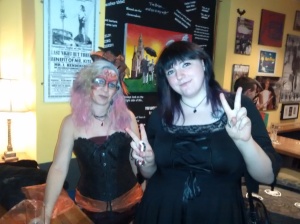 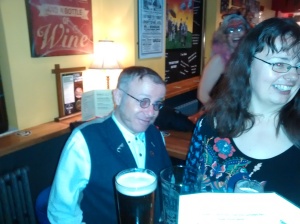